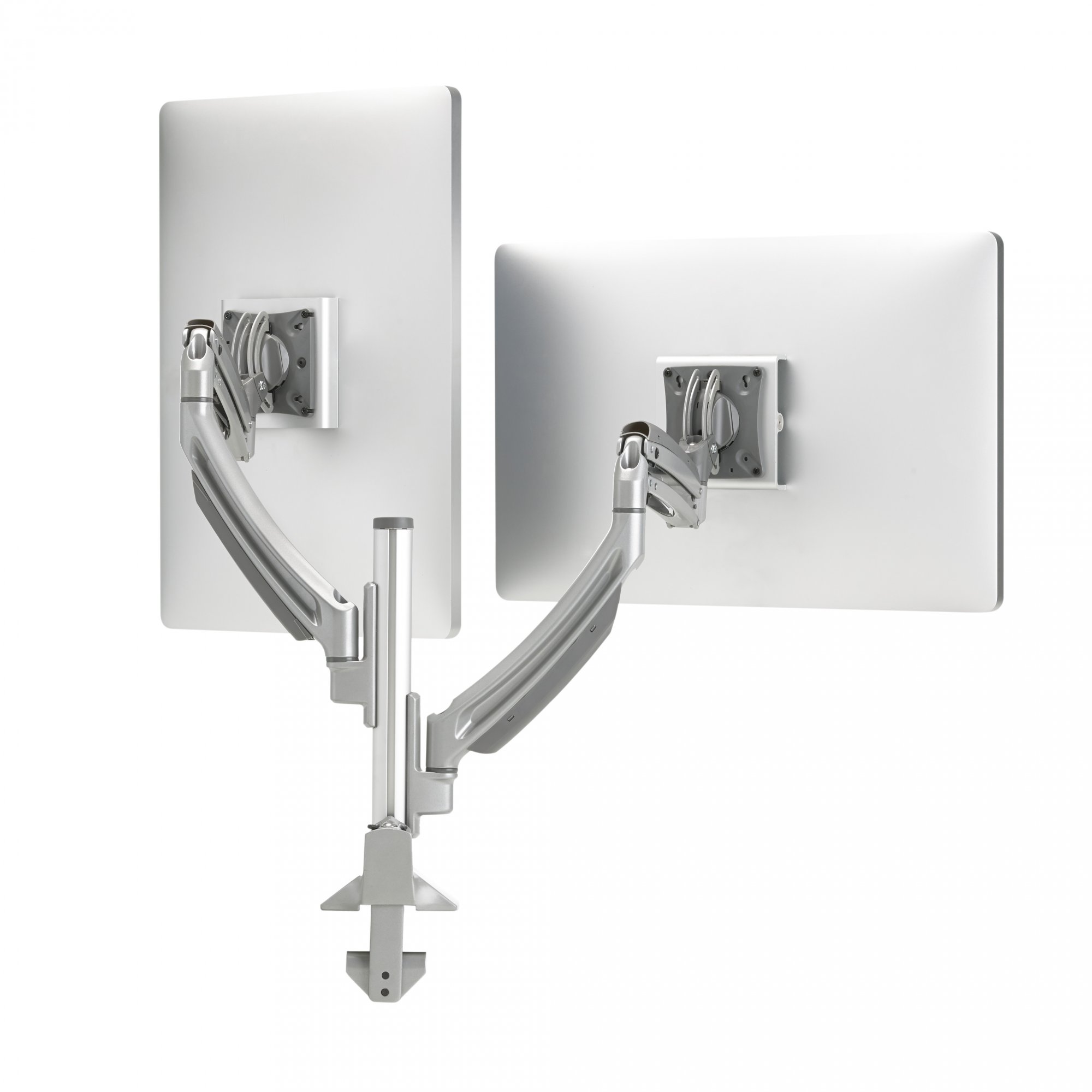 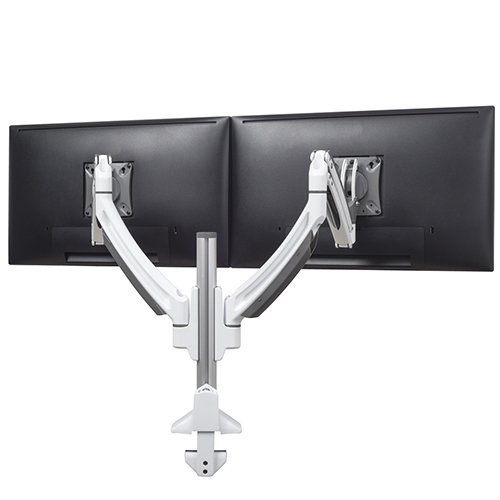 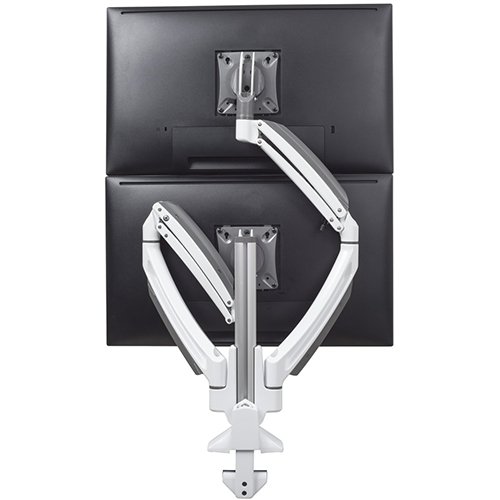 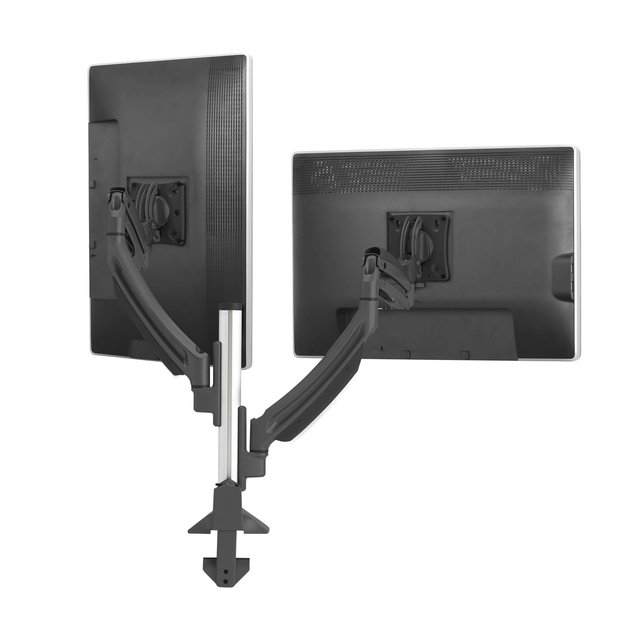 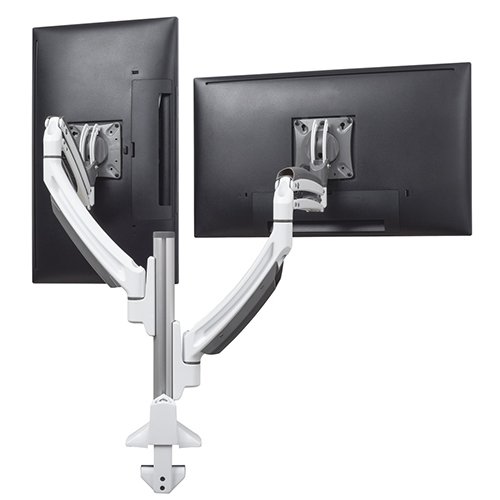 Key enhancements have been made to Chief's patented Centris Extreme Tilt technology for effortless fingertip monitor positioning. Kontour monitor mounts float your displays in the optimal ergonomic position above your work surface to create a more productive and comfortable work environment. 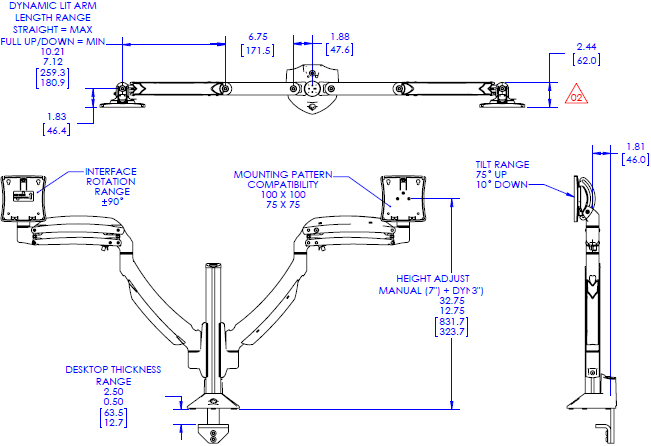 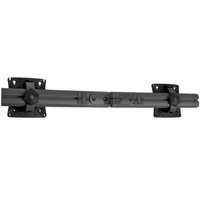 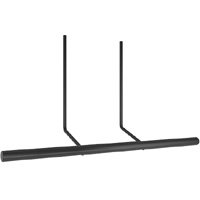 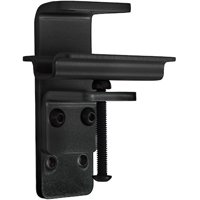 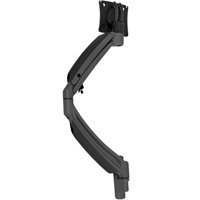 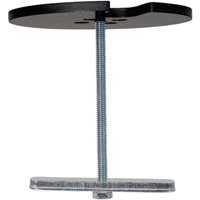 Quite happy with what I got

I was wary of buying this product because I couldn't find any review of it online, despite having launched in 2014 as far as I can see from the manufacturer videos on youtube.
As far as I've found, this is the only dual monitor dynamic arm system that comes in silver and goes up to 22lb of monitor weight.
Anyway, I'm pretty happy about it. I mounted two very heavy monitors on it, a 27 inch 19lb NEC and a 32 inch 22lb Samsung, and they are both supported just fine. Construction is solid aluminum arms with hard plastic inserts, and the movement feels quite good.
I had to set the 2 tension screws up a lot, they came at what I think is the lowest setting, which was way too low for my monitors. I started with the bottom one and turned it all the way up, then moved to the top one, which is hidden under the cable compartment, and had to twist that quite a bit also, but now my displays stay exactly where I want them.
If I could change one thing I would make that second screw more accessible. It can only be adjusted when the arm is all the way up and when you have a heavy monitor on it it's hard to hold the monitor and adjust. So turn it up before you put the monitor on, I learned to do that for my second monitor. But it's not like I will adjust it every day.
I bought the extra 'Narrow-Gap Table Clamp' but couldn't figure out what that's really for. The one that comes with seems just as narrow, so I don't recommend adding it.

With the exception of electrical products, Chief warrants its products to be free of defects in material and workmanship for 10 years. All warranties are in effect beginning the date the product was invoiced by Chief. Electrical mechanisms (such as lift products) have a 1-year limited warranty. All warranties are in effect for the original purchaser only. Chief disclaims liability for any modifications, improper installation and/or installations over the specified weight capacity. Chief also disclaims liability for any modifications made to electrical mechanisms, improper installation, incorrect voltage connection and/or installations over the stated weight capacity. All Electrical Mechanisms are intended for indoor use only and failure to comply will void warranty.

Chief's sole warranty obligation to the owner of its products is to repair or replace (at Chief's discretion) defective products at no charge to the original purchaser within the warranty period. The purchaser is responsible for returning the product to Chief Manufacturing via prepaid shipping. To the maximum extent permitted by applicable law, Chief disclaims any other warranties, express or implied, including warranties of fitness for a particular purpose and warranties of merchantability. Chief will not be liable for any damages whatsoever arising out of the use or inability to use Chief products, even if Chief has been advised of the possibility of such damages. Chief bears no responsibility for incidental or consequential damages. This includes, but is not limited to, any labor charges for the repair of Chief products performed by someone other than a Chief employee. Because some states and jurisdictions do not allow the exclusion or limitation of liability for consequential or incidental damages, the above limitation may not apply. Chief will not be responsible for damage to Chief products caused by misuse, abuse, failure to properly package the product for return to Chief or for damage caused by carriers during shipment to or from Chief. Any repairs to Chief products required due to misuse, abuse or shipping damage or repairs of defective Chief product outside the warranty period will be performed at the current rates established by Chief for factory service. 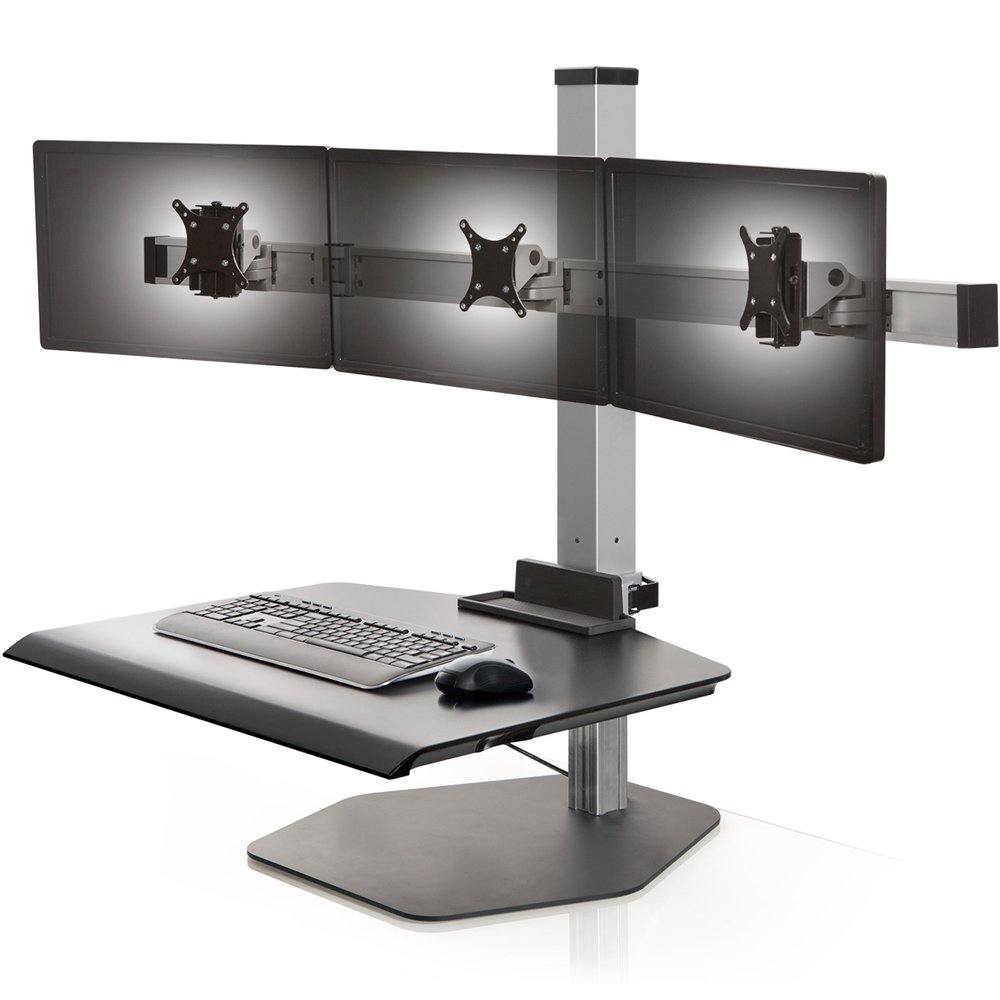 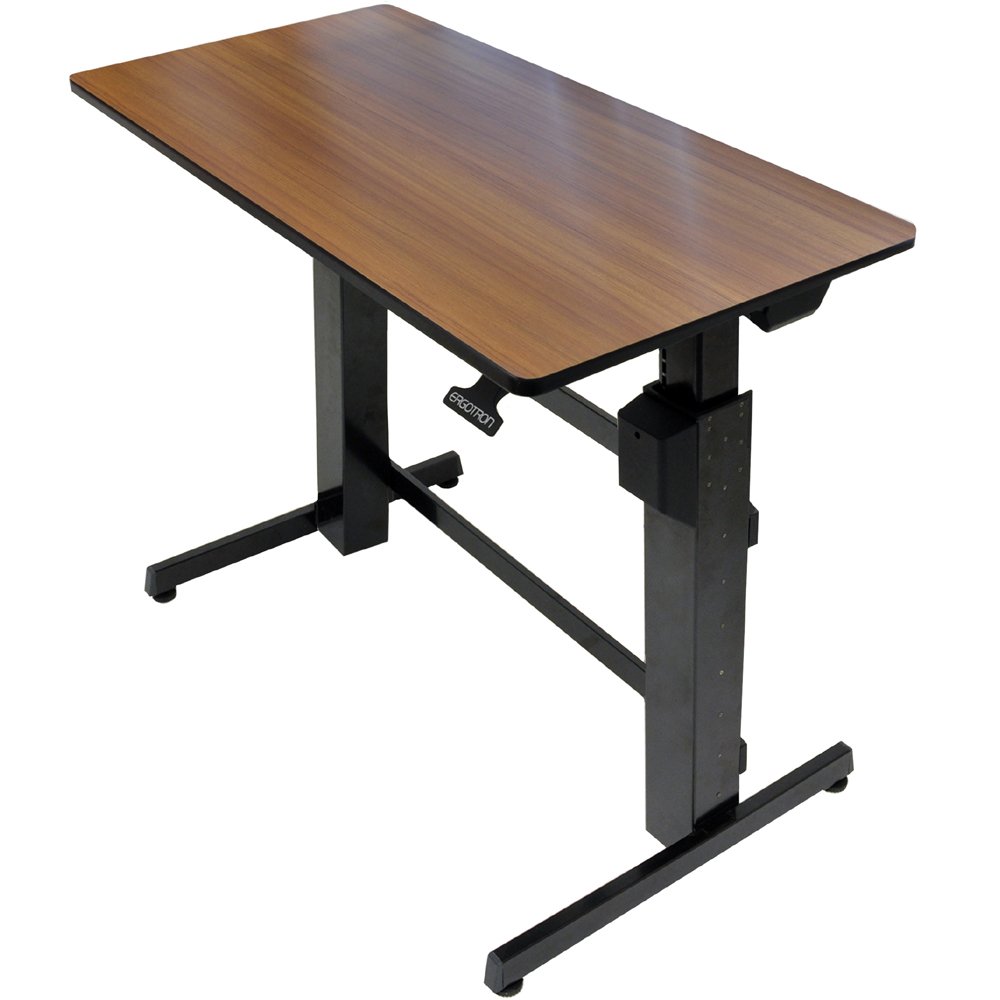 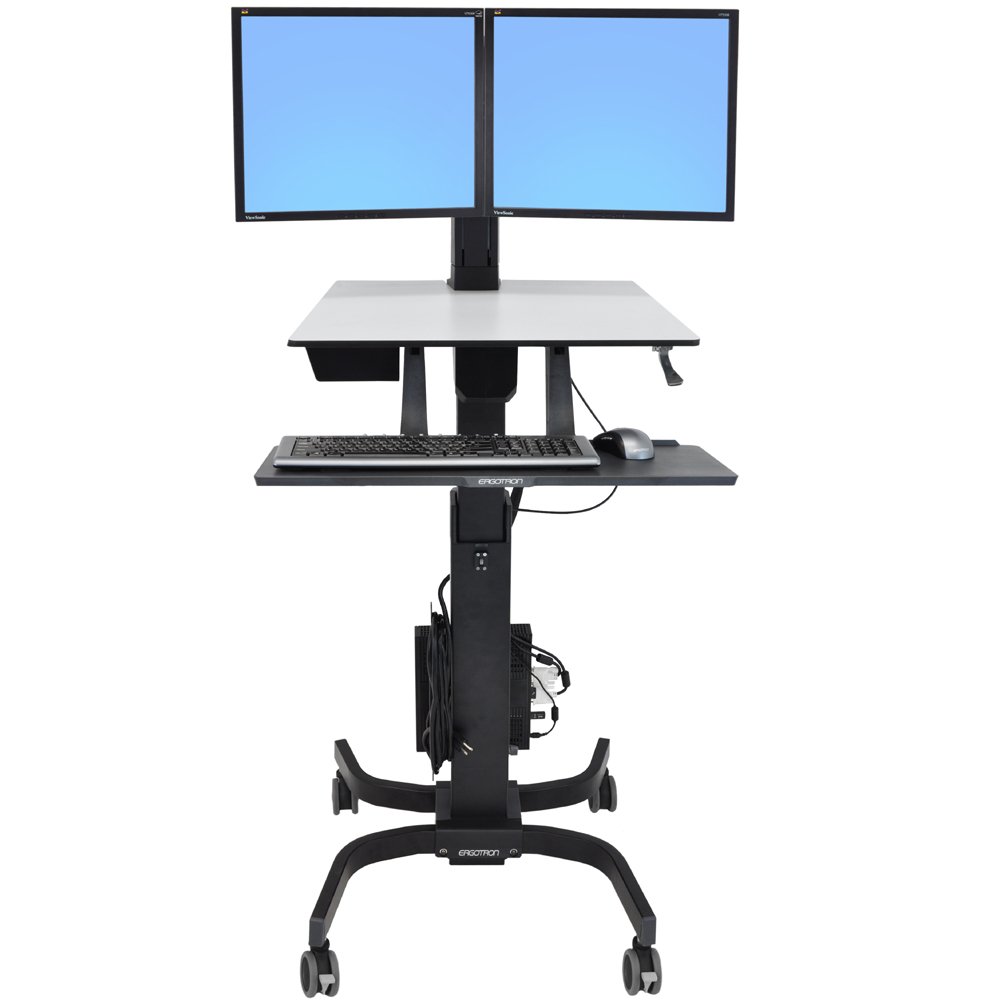